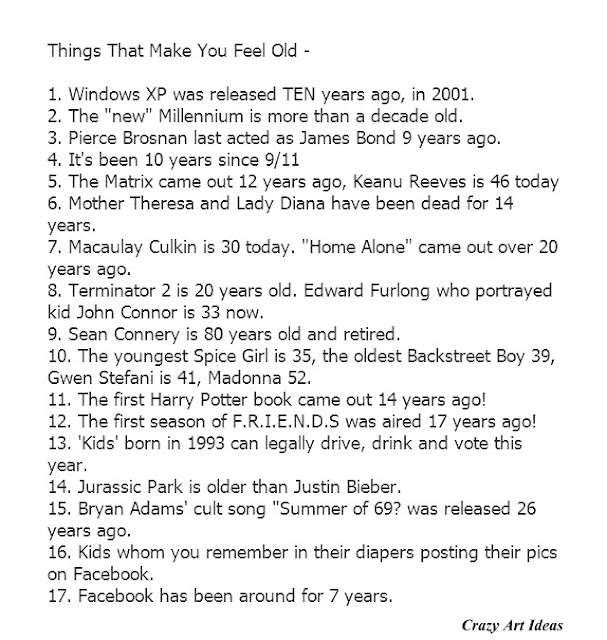 You are older than you think! Making you think many things happened “recently” is a trick played by your sub-conscious to make you think you are young and kicking. Inspired by XKCD’s Epic diagram that makes people think they are old based on movie release dates, and then 40 things that make you feel old, I present my contribution – with more of Indian stuff thrown in. Enjoy, feel old and miserable!  So,(Note: Important information at the end.)

Do You Realize That:

3. The “new” Millennium is more than a decade old.

4. Chetan Bhagat’s antics have been around for the past 7 years!

9. Mother Theresa and Lady Diana have been dead for 14 years.

10. Remember Jungle Book on Doordarshan? That was more than 15 years ago.

16. The first Harry Potter book came out when I was in High School. 14 years ago!

20. Arnold Schwarzenegger is older than India. He was born in June 1947

Where are my car keys, bob?

26. Kids whom you remember in their diapers posting their pics on Facebook

29. The Maruti Zen was first introduced 18 years ago.

Hope you are feeling better now. Please let me know.

(P.S.: It is fine if you want to copy and send this as an email forward, but be kind enough to give me credit and include this as well:  From vadakkus.com, Source: http://bit.ly/feeloldindia Took a lot of work to create this, appreciation is appreciated! )

7 thoughts on “17 Things That Make You Feel Old”