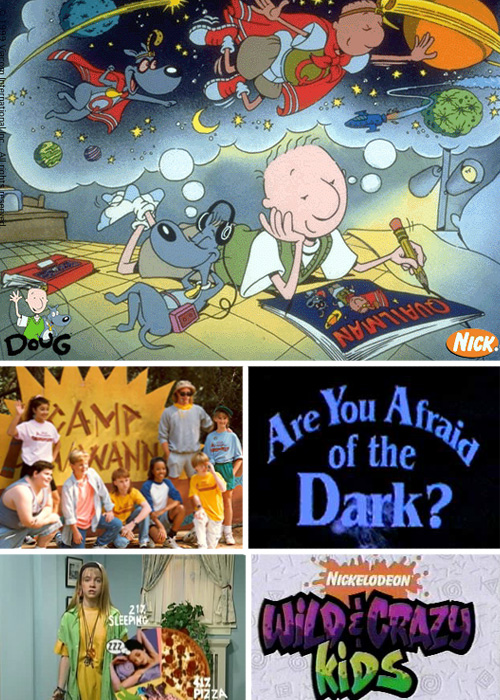 Sick of the crap that kids are expected to watch on television now? Feeling nostalgic for the good ol’ days of Nickelodeon, the golden age when cartoons were still hand-drawn, and your favorite characters were wearing spandex, over-sized T-shirts, and mullets? Well, dig out your Walkmans and Gak, because here are the 15 best shows that Nickelodeon brought to the 90?s.

Are You Afraid of the Dark?

“One thing gathers us together: the dark.”

Who didn’t want to be a member of the Midnight Society? The arc of this show revolved around a group of stereotypical 90?s kids that met one night a week at a secret location in the woods, to share PG-rated scary stories.

The stories were usually adaptations of fairy tales, urban legends, and scary stories that were in the public domain. Seen now, most of the tales aren’t so scary, and they probably weren’t at the time either. But Are You Afraid of the Dark was still the highlight of each SNICK lineup. Even with the cheese factor, they’re still worth watching as an adult.

Donkey Lips. Budnik. Sponge. Ug. Summer camp was never nearly as interesting as Camp Anawanna was, and nobody ever had such awesome nicknames. Salute Your Shorts is to this day the only American television show to include the word “fart” in its opening theme, which automatically elevates it to “freaking awesome” status to most 9-year-olds. Despite the terrible child actors, Salute Your Shorts actually manages to retain a portion of its humor for grown-ups, so long as they aren’t looking for anything highbrow.

Ren and Stimpy. The very words conjure up memories of anthropomorphic farts, nose goblins, and terrifying Star Trek spoofs. Is there anyone between the ages of 18-35 who can’t recite “The Log Song” or “Happy Happy Joy Joy?” Love it or hate it, Ren and Stimpy had a serious impact on American television and animation.

Starring Ren Höek, a psychotic chihuahua, and Stimpson “Stimpy” J. Cat, the show was a parade of gross-out humor tinged with the bizarre. The show quickly became a target for censorship, due to the extreme violence and out-and-out nastiness. Nickelodeon fired the creator and original director, John Kricfalusi, after two seasons.

Kricfalusi later teamed up with Spike TV to reboot the series for an adult audience, but production halted after three episodes. Everyone was unsettled by the new series, audiences and critics alike.  When Spike TV – the network that airs 1001 Ways to Die – says your show is too crazy, your show is seriously crazy.

Rocko’s Modern Life rode in on the same wave of bizarre gross-out humor that Ren & Stimpy did. Starring a pant-less wallaby named Rocko, his dog Spunky, and a supporting cast of various kinds of animals, it was the kind of show that wrung the potty humor from every possible situation. We’re not particularly squeamish, but watching a frog shave its tongue kind of loses its appeal after puberty. It doesn’t have the edginess of Ren and Stimpy, or the snappy dialogue of Angry Beavers, but It’s gross and weird and… why is there a moose in that refrigerator?

Okay, Rocko’s Modern Life is worth watching just for the sheer WTF factor.

Wild and Crazy Kids functioned on two guiding principles: 1.) Kids want to watch other kids doing things they dream of doing, and 2.) Pies to the face are always, always funny. It was a winning formula. It’s still a winning formula, with the added bonus of being able to make fun of the terrible shirts that Omar Gooding and Donnie Jeffcoat wore.

Now that we think about, Nickelodeon implemented their Pie = Awesome and Wacky Stunts = Ratings formula elsewhere. Double Dare, hosted by Marc Summers, was one of the longer running Nickelodeon shows, beginning in 1986 and sticking around until 1993, and was even revamped as in January of 2000. Besides the requisite pies-in-the-face, contestants regularly got soaked with water, milk, and Nickelodeon’s trademarked slime, and — best of all — go through an obstacle course.

The show put Nickelodeon – still a fledgling network at that point – on the map.

Legends of the Hidden Temple

Legends of the Hidden Temple was another of Nickelodeon’s game shows. Competing teams of kids took orders from a giant, animatronic head named Olmec, answered questions about half-bogus legend, and then ran through an obstacle course.

(Seriously, why are there no more obstacle courses on television anymore? Why are we only stuck with shows like Survivor for nine million seasons?)

The show was part Indiana Jones and part American Gladiator, with all the historical inaccuracies of the first mixed with the hilarious physical challenges of the second. A seriously winning combination.

Though not as creepy as Rocko’s Modern Life or straight-up weird as Ren and Stimpy, Angry Beavers was memorable for having the best dialogue in a kid’s show ever. Much of it, of course, is a hell of a lot funnier if you’re an adult. Here are some examples from theAngry Beavers IMDB page.

Aaah! Real Monsters! was like Freaks and Geeks crossed with Monsters Inc. Its three protagonists, Ickis, Oblina, and Krumm, were adolescent monsters and were forced to deal with all the normal pains of growing up (peer pressure, school, parents), but with the added bonuses of living under a dump, scaring humans every day, and having a teacher who looked like Dr. Frankenfurter.

If that isn’t enough to convince you of the show’s awesomeness, the animation has a lot of similarities to Yellow Submarine, which is a breath of fresh air if you’re sick of all dubbed anime and crap CGI cartoons.

Pete and Pete originally aired as a series of Nickelodeon shorts. Due to their popularity, they were eventually produced into full-fledged series that lasted for three seasons.

Pete and Pete was a prototype of the hipster movement. Don’t believe us? Look at the glasses, the flannel hats, the irony and whimsy.  Look at little Pete’s tattoo, Petunia. Artie (the strongest man in the world) looks like he just rode his fixed-gear bike from a local cafe/bookstore in Portland.

All that aside, Pete and Pete is a sweet ode to suburban ridiculousness. It manages to satirize silly middle-class values without ever getting too cynical or saccharine. Pretty rare for a kid’s show.

Anyone remember Alex Mack, superhero, mutant, and 90?s fashionista? With a premise that was lifted pretty much entirely from any superhero comic, plus standard kids’ show plots, Alex Mack is like the offspring of Daredevil and Degrassi. After accidentally getting drenched in a secret chemical goo, Alexandra Mack has the ability to shoot electricity out of her fingertips, morph into a silver puddle, and move things with her minds. With these awesome powers she… experiences teenage drama. Well, points for trying, Nickelodeon.

On the other hand, it is fun watching Alex Mack develop a serious hat fetish is kind of fun.

Clarissa Explains It All

There’s probably not a single woman under 30 who didn’t want to be Clarissa Darling when she was growing up. She had it all: wit, a superfly best friend, and a sweet computer (for 1992). She was the original geek girl hipster, and she had the best wardrobe ever.

Clarissa Explains It All is still worth watching, mostly for the ridiculous computer simulations that Clarissa designs in each episode, most of them focusing on how to torture her Young Republican brother Ferguson. How much do you want to bet that Clarissa got rich in the dotcom boom, moved to Seattle, and lives in a commune with Sam?

(No actual video available, because Disney has Doug locked down tight.)

Doug was one of Nickelodeon’s first Nicktoons, premiering at the same time as Rugratsand Ren and Stimpy. The main character was Doug Funnie, who detailed his days in the town of Bluffington in his diary. Like many of Nickelodeon’s programming, many of the plots dealt with humdrum issues like peer pressure and crushes on girls, but it spiced things up with forays into Doug’s imagination: who could forget Quail Man, or (WA-NA-NA!) Jack Bandit?

Doug was bought by Disney in 1996. The company gave Doug a makeover and produced three more seasons and a full-length movie before shutting the franchise down. Since then,Doug has run afoul of Youtube users who enjoy ruining others’ childhoods. Awesome.

Before there was All That, there was Roundhouse. And it was awesome.

Performed before a live audience, and using minimal props and sets, Roundhouse was a fast-paced sketch show, making use of its multi-racial cast’s dancing and singing talents as well as their comedic ability. It was like In Living Color for kids. (Not that we didn’t watchIn Living Color as kids, but still.)

The most successful of all of Nickelodeon’s live-action shows, All That ran for ten seasons, from 1995-2005. It gave birth to 5 spinoff shows, and started the careers of Kenan Thompson and Kel Mitchell.  Some of their best sketches included: 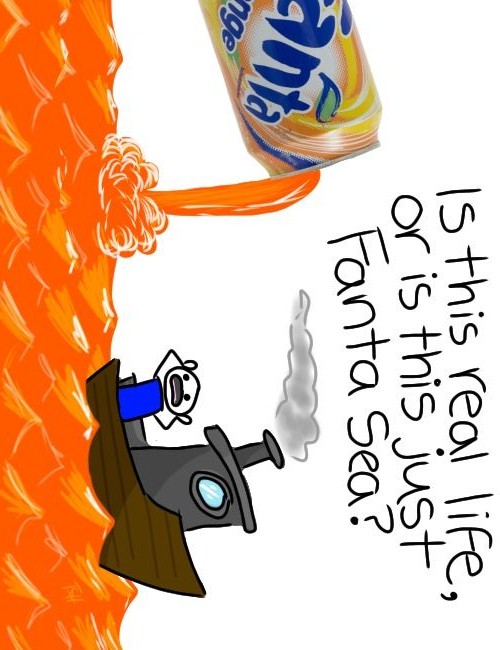